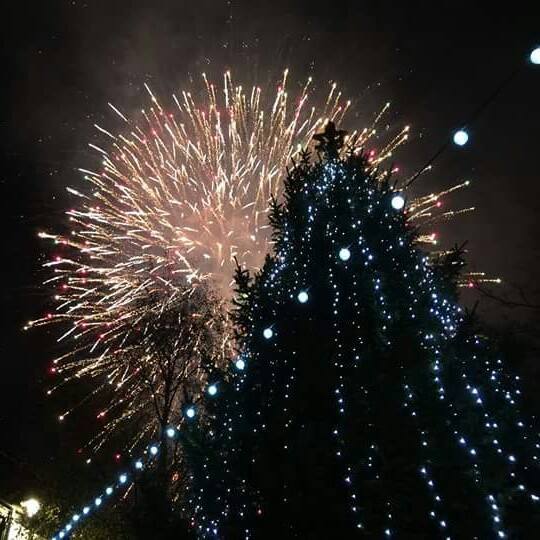 Festive cheer could be found at every turn as thousands filled the streets to enjoy a whole host of amazing attractions and activities, before the Lights switch-on and firework finale lit up the night sky in a spectacular climax.

Organised in a successful partnership between Northwich Town Council and the Northwich Business Improvement District (BID), the aim was to go one better than 2015’s and it did not disappoint.

Visitors were captivated by the Reindeer and Penguins, enjoyed perusing the many festive stalls run by some of the town’s businesses and were also impressed by the beautiful bespoke products available on the Northwich Teenage Market at the top of Witton Street.

Free Christmas tractor and trailer rides were in high demand, while the Arts and Crafts tent, Christmas Crazy Golf and Donkey Rides kept both children and adults alike entertained alongside Birds of Prey and fairground rides.

‘There was magic in the air’

Santa was of course in town for the day, while a whole host of Princesses and Superheroes and Stilt walkers ensured there was magic in the air for the kids in attendance.

A range of delicious food stalls provided tasty treats, while people enjoyed festive cookery demonstrations outside Edinburgh Woollen Mill from chef Nigel Brown who used fresh fish supplied by Dilworth’s in some of his dishes.

Musical performances took place throughout the afternoon and attendees were encouraged to take a selfie with Northwich mascot Mrs Salt; whoever’s photo gets the most votes on the Visit Northwich website will go on to win a £100 shopping voucher to spend in the town just in time for Christmas.

Even though there was a chill in the air, the day’s events warmed everyone’s cockles and the event had a spectacular finale to cap off Northwich’s biggest and best Extravaganza yet.

After the lantern parade had meandered to the library steps, the Children’s Christmas competition winners saw their designs come to life before the firework display brought the Northwich night sky to life.

Northwich Town Mayor Cllr Kevin Rimmer was delighted with how the day went and feels that the council, along with the BID, succeeded in making this year’s event the best yet.

“The town was absolutely packed with visitors and they helped create such a brilliant festive atmosphere – it was great to be a part of it.

“Once again both the Northwich Town Council and the BID have worked very hard to provide a mix of activities and events that everyone could enjoy and I feel we really captured that Christmas spirit.

Northwich BID Manager Jane Hough was in complete agreement with the Mayor and felt a few new additions to the line-up helped create extra buzz.

“Having Reindeer and Penguins alongside firm favourites added magic and intrigue to the day and everyone was so excited to see them in Northwich.

“It was great to see so many smiling faces in the town and that made all the planning and organisation of the event worthwhile. The only problem now is how to top the event next year!”